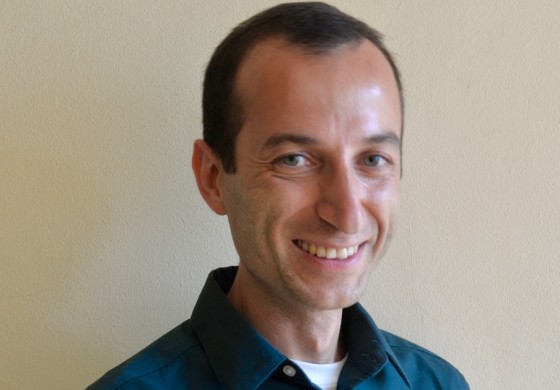 For David Turshyan, a trip to Armenia was long overdue. Born and raised in Yerevan, he moved to Los Angeles in 1996 with his family as a teenager. After obtaining a Master of Library and Information Science from the University of California, Los Angeles, he started working as a librarian for the Pico Union branch of the Los Angeles Public Library (LAPL). In 2013, he was promoted to the position of International Languages Librarian specializing in Armenian and Russian at the LAPL’s central branch.

Twenty-one years later, Turshyan returned to Armenia this summer as a volunteer for the Armenian Volunteer Corps (AVC). After the organization put him in touch with Together4Armenia, he registered as a diaspora expert and gave two trainings on library management at Lori Regional Library in Vanadzor and Gegharkunik Marz Library in Gavar.

We caught up with Turshyan recently to discuss his experience with Together4Armenia and AVC, the evolving field of library science, and his deepening relationship with Armenia.

Take us through your responsibilities at the LAPL.

In the International Languages department, I select books in Armenian and Russian for the central library and the LAPL’s 72 branches. I also do programs: I teach computer classes, do puzzle programming, and screen films in international languages.

I created the World Cinema Series because there was a demand for languages. We’ve screened films in Armenian and Russian such as If Only Everyone (2012) and Burnt by the Sun (1994). Besides that, I do outreach. We go to different places to promote library services like at book festivals and parks and recreation centers.

What aspect of your job do you enjoy the most?

Working with the public. On a day-to-day basis I get in touch with different people from different parts of the world. One time, we had a patron who had come all the way from the airport with his luggage to the library just to find out about services in Los Angeles – where to stay, where to eat, and so on.

What aspects of your day-to-day job are most challenging?

We have this big issue of homelessness in Los Angeles. We have a “no sleeping” policy in the library, but a lot of people come to the library and find a comfortable place where they feel safe. Sometimes it’s very challenging for us to approach a person and wake them up, knowing that it’s hot outside and they don’t have anywhere to go.

We’re a public library; we need to help everyone. Sometimes, that creates a conflict when we are helping some people who might hinder others working in the library. We are trying to solve this issue by working with other organizations through The Source, [a monthly event at LAPL’s Central Library] that provides housing, hygiene, food and cell phones to the homeless.

What are some trends happening right now in the field of library science?

Internables are becoming very trendy. Instead of using cell phones or computers, technology is going to be part of the human body. How will this be reflected in libraries? For example, how will people learn languages? It might sound like science-fiction now, but it might become possible to just put a chip in your head and transfer all that knowledge into your brain.

What are your impressions of Armenia after such a long absence?

When I came back to Armenia after 21 years, it was a completely different country. I can’t even recognize the places I’d been before; you’re in a different civilization, different place, different mindset, different worldview. Sometimes it’s overwhelming because I’m trying to connect them to past experiences, but at the same time it’s very inspiring to see all these changes.

What’s an example of something that really struck you?

In Soviet times the street names were often named after heroes of the Soviet Union, but now the streets are named after cultural [figures] from Armenia: writers, poets, musicians. Throughout Armenia I can see very beautiful boards with the names of the people who have contributed to the country, like the writer Hovhannes Tumanyan.

After your family immigrated to the US, how present were Armenian culture and language in your household?

Preserving and cherishing Armenian culture and language is strongly embedded in almost every Armenian. There is a well-known Armenian poem by Silva Kaputikyan, “Words to My Son,” that ends with these lines:

“So look, my son, wherever you may be,

Wherever you may go under this moon,

Even if you take your mother out of your head,

Your mother tongue don’t you forget.”

How has your experience with T4A and AVC changed the way that you perceive your relationship with Armenia?

There are people from different parts of the world at AVC, including people who have biked or hitchhiked all the way to Armenia from European countries. Their motivation to study Armenian and come to Armenia is very inspiring. It makes me think that Armenia after all is a very important country, although it’s very small. A while ago, National Geographic listed it as one of the ten “Places that Deserve More Travelers.” AVC has helped me to discover that perspective; if I didn’t come through [them], I would have just come here as a tourist.

What advice would you have for other members of the Armenian diaspora who are considering getting involved with T4A or AVC?

I would recommend for them to come to Armenia, even if it’s for a short time. When you come as a tourist, it’s a completely different experience from when you come as a volunteer. Volunteering for AVC, Birthright Armenia or T4A is a decision that each individual needs to make themselves; by its very nature, it gives us a choice to do or not to do, but if the individual makes the positive decision, it may open a whole new horizon with the possibility of memories to be cherished for years to come.

What do you have planned for the rest of your time in Armenia?

Meeting and interacting with local Armenians, sightseeing, and tasting the delicious apricots while they are still in season.

To find out more about David Turshyan’s trainings for Together4Armenia, click here. To view his Expert profile, click here.